The Dangers of Overexercising 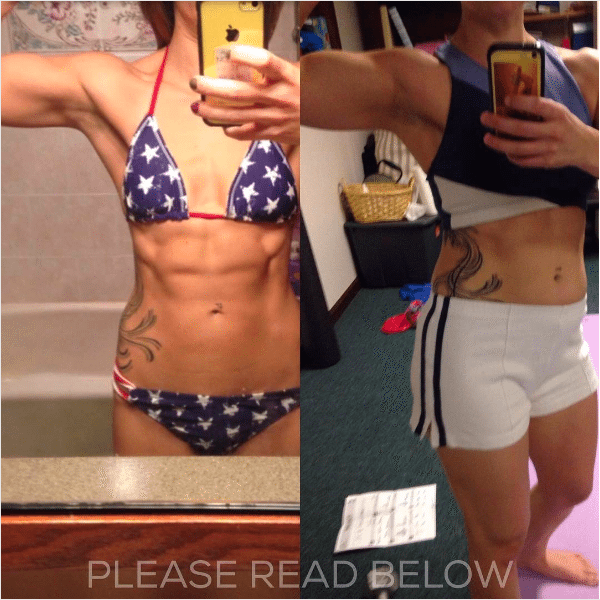 Here’s to a different kind of body transformation. On Instagram yesterday, fitness influencer Anna Victoria shared a follower’s photos that document her inspiring recovery from an extreme exercise habit.

In the “before” pic, @barbellkell_fbg is flexing her biceps in a bikini that shows off her chiseled six-pack.

The photo on the left was taken a year and a half ago, when @barbellkell_fbg was committed to a 10-week plan that involved working out five times a week, sometimes twice a day, and counting macros (down to chewing gum, vitamins, and cough drops), she explains in the caption. “[Z]ero balance, zero living, zero sustainability,” she wrote. “I had my full time job and this, which was another full time job basically.”

The strict dieting and intense workouts took a serious toll. By the end of the plan, @barbellkell_fbg had a flat belly, and no trace of cellulite—but her energy levels had plummeted. “I could barely lift my feet to run on the treadmill,” she wrote. A blood test showed her white blood cell count was severely depressed. It was so low her doctor wanted to test her for cancer, she says.

After convincing him to do another blood test in a month, @barbellkell_fbg committed to getting back to “normal.” She ate “to survive,” she said; and in time, she gained fat and her white blood cell count recovered.

OD’ing on exercise is a real thing, and it can cause everything from fatigue to chronic achiness—even an elevated heart rate, which puts more demand on your ticker. “Overexercising often contributes to pain, dehydration, or electrolyte imbalances, all of which can lead to an increase in heart rate,” Kathryn Berlacher, MD, a cardiologist at the University of Pittsburgh School of Medicine, explained to Health in a prior interview.

Signs That You’re Overdoing It At The Gym

And tips on how to scale back—check out our guide to the symptoms of overtraining.

As for @barbellkell_fbg, she’s come a long way in the last 18 months. She now follows Anna Victoria’s Fit Body Guides, and eats what she wants in moderation. “I feel good. I am strong. I am happy,” she says—and she loves the body she has now.

Bicycling and Back Pain: What to Know

Podcast: Nutrition and Fitness During These Times