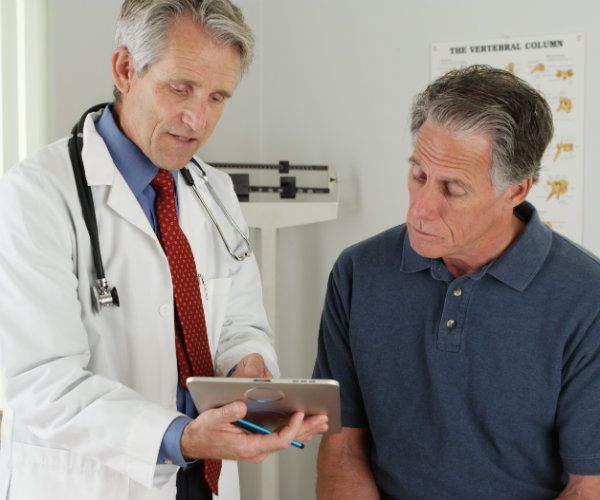 Gray hair could be an early warning sign of heart disease. Hiccups that won’t go away may foreshadow cancer. Sometimes your body sends seemingly unrelated signals that something is wrong.

Since the key to treating most health problems is to catch them early, it can pay off big time to spot the tip-offs. And the first thing to check out is your skin.

“Skin is the only organ of the body that you wear on the outside,” says dermatologist Dr. Robert Brodell. “Since it’s connected to internal organs through blood vessels, nerves and other things, it can be like a window to see what’s going on inside.”

Here are 10 symptoms and what they may really mean:

Rash on shins: Formally called necrobiosis lipoidica diabeticorum (NLD), a raised red-brown patch with yellow blotches could mean that you have diabetes or are poised to get it. “Sometimes we see this in patients and know they are diabetic before they know it themselves,” says Brodell, chairman of the dermatology department at the University of Mississippi Medical Center. “In some cases, their blood sugar is normal, but over the next six months to two years, they develop diabetes.”

Splinter hemorrhages: They look like thin red splinters running lengthwise under fingernails and could be caused by endocarditis, a bacterial infection of the heart valves. “You wouldn’t think that someone looking at fingernails could detect what could be a significant heart problem,” Brodell tells Newsmax Health.

Rash on eyelids: This violet-hued rash is a symptom of dermatomyositis, an inflammatory muscle disease that is associated with various forms of cancer, most commonly ovarian. Other symptoms include raised scaly bumps on knuckles and ragged cuticles that separate from the nail.

Skin discoloration: The most common is jaundice, a yellowing of the skin that is a classic symptom of hepatitis and other liver conditions. Less known is a darkening of the skin in creases and old scars that may indicate an adrenal gland problem, such as Addison’s disease.

Tender nodules on shins: A condition called erythema nodosum is marked by red swollen bumps on the front of the legs. Brodell says that while they are sometimes a reaction to medications or oral contraceptives, they could also be a warning of the inflammatory pulmonary disease sarcoidosis.

Persistent hiccups: For most of us, this spasm of the diaphragm is an annoying but harmless problem. But when hiccups last two days or more, they could be an early warning sign of deadly esophageal cancer.

Shoplifting: If your elderly mom or dad starts getting sticky fingers, it could be a sign of a certain type of dementia. A study published in the Journal of the American Medical Association’s Neurology details how people with frontotemporal dementia lose their sense of societal conventions and may take items in shops without paying for them.

Color blindness: The inability to distinguish between different hues is a sign of Parkinson’s disease. Other odd symptoms of the neurological disorder are writing smaller and swimming in circles.

Earlobe wrinkle: A diagonal crease in one or both earlobes has long been linked to heart disease. Also called “Frank’s sign” after Dr. Sanders T. Frank, the physician who first made the association, this odd symptom has been supported in several studies, though no one has yet to figure out why.

Gray hair: A touch of gray is another early warning sign of cardiovascular problems, regardless of age and other factors, according to a recent study by Egyptian researchers. Heart disease in general can generate several seemingly unrelated symptoms, including bleeding gums, swollen feet, frequent urination at night, uncontrollable head bobbing, yellow spots on eyelids…and the list goes on.

“The reason that heart disease has so many varied symptoms may be because there are many types of heart disease that will present in different ways,” explains Dr. Richard Greenberg, a cardiologist at Temple University Hospital in Philadelphia, Pa. “Another reason is that the circulatory system is connected to every cell in the body, so it follows that symptoms of heart disease could show up anywhere.”